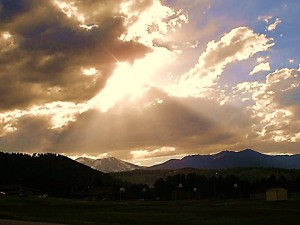 Key Bible Verse: Christ appeared in the flesh and was shown to be righteous by the Spirit. He was seen by angels and was announced to the nations. He was believed on in the world and was taken up into heaven.  – 1 Timothy 3:16

The time between the resurrection and the ascension was, in the words of McGill University professor Douglas Farrow in Ascension and Ecclesia, “a new coming of Jesus himself with his humanity intact and his divinity no longer veiled. It was the time in which God was clearly seen and known to live as this man, and this man as God.”

What do we actually know about the ascension? We know where Jesus went, for he told us that he was going to the Father from whom he had come (John 16:5-11). We know why he went: to prepare a place for us with his Father, to which he will bring us. How he went is through the entire route of the incarnation, culminating in the cross and the resurrection. “And the consequence of his going,” writes Farrow “is a mission of the Spirit aimed at the proclamation of the Father’s open house.”

Because Jesus ascended, Christians live in a unique place of both “waiting eagerly” and “groaning.” We are “the prophetic sign to the world” that at Jesus’ ascension God enthroned him at his right hand, at the center of all existence throughout space and time.

—Marva Dawn in Talking the Walk

My Response: I’ll thank Christ that he “has become the first of a great harvest of those who will be raised to life again” (1 Cor. 15:20).

Thought to Apply: The one who judges us most finally will be the one who loves us most fully.    —Frederick Buechner

Adapted from Talking the Walk (Brazos, 2005)

Prayer for the Week:  Thank you, Jesus, for glimpses of your divinity, with markers of your humanity retained, that preview life eternal for us.