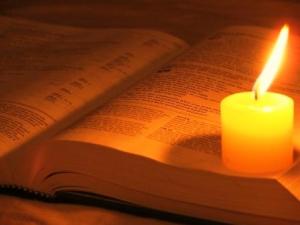 Why do the nations conspire[a]
and the peoples plot in vain?
2 The kings of the earth rise up
and the rulers band together
against the Lord and against his anointed, saying,
3 “Let us break their chains
and throw off their shackles.”

4 The One enthroned in heaven laughs;
the Lord scoffs at them.
5 He rebukes them in his anger
and terrifies them in his wrath, saying,
6 “I have installed my king
on Zion, my holy mountain.”

7 I will proclaim the Lord’s decree:

He said to me, “You are my son;
today I have become your father.
8 Ask me,
and I will make the nations your inheritance,
the ends of the earth your possession.
9 You will break them with a rod of iron[b];
you will dash them to pieces like pottery.”

10 Therefore, you kings, be wise;
be warned, you rulers of the earth.
11 Serve the Lord with fear
and celebrate his rule with trembling.
12 Kiss his son, or he will be angry
and your way will lead to your destruction,
for his wrath can flare up in a moment.
Blessed are all who take refuge in him.

Lent is a season of repentance and humility, a time where we are called to consider our human sin and frailty in light of the splendor and perfection of God our King.

Psalm 2 is the first of many so-called “royal Psalms,” focusing on God’s kingly character. The psalm opens with a question that answers itself, establishing rebellion and the throwing off of God’s yoke as the desire of the nations and kings who conspire against the true King.

The reaction of “He who sits in the heavens” is scornful laughter, highlighting the ridicule of one who will not be mocked.

The reaction is not only derision, but action. The Lord refers to his Son, the real and true king, who will come and accomplish everything that was originally expected from David and his entire lineage. All is his and his reign over all false kings and nations betrays the attitude of rebels as not only foolish, but dangerous.

In a jarring and ironic poetic image, the “potter” (Isaiah 45:9) will smash their lives like broken pottery, which becomes trampled underfoot and ultimately insignificant — trash on the ground.

While this psalm is sobering in its judgment, it also offers great hope. It points forward to the true divine Son who came to be the final and only truly righteous king, the one who obeyed his Father perfectly and broke the yoke of sin to set us free.

Because Christ accomplished his mission on earth, he could definitively say: “All authority in heaven and on earth has been given to me” (Matthew 28:18). He is the one the scriptures call “the radiance of the glory of God and the exact imprint of his nature, and he upholds the universe by the word of his power.” (Hebrews 1:3).

Prayer:  Our King and Father, where you are there is majesty and perfection. Thank you for giving us your Son, who reflects your glory and intercedes for us, advocates for us, and sends us the Holy Spirit to lead us into all truth. In Christ’s Name, Amen.